VIDEO PRODUCTION FROM A VETERAN’S PERSPECTIVE

VIDEO PRODUCTION FROM A VETERAN’S PERSPECTIVE

The biggest lessons I learned in the military definitely have to do with leadership, teamwork, and getting the job done no matter what obstacles you might face. Quitting isn’t an option when you’re deployed, so you just develop the innate ability to adapt to any situation, tweak your plans as needed, and accomplish the mission no matter what.

How does this translate into filmmaking?

It’s actually quite fascinating how similar filmmaking is to serving in the military. There is a distinct chain of command on a film set, just like in the service. There are different tasks assigned to different crewmembers. Each person is responsible for their part – whether it’s running the set, lighting, operating a camera, or catering – and these parts all serve the whole mission, which, in our case, is the finished film or commercial. We travel a lot as well, so it’s like planning a mission. Where are we going? How are we getting there? Who is going? What equipment are we taking? Who will we be linking up with? How much time do we have to make this all work? How are we getting back? As a Production Manager, my job is to prep, plan, budget, and execute shoots, and my time in the service set me up to excel in all of these capacities.

What would you say to other veterans who are interested in learning more about working in production?

I would say to contact another vet who is already working in the industry and pick their brain for an hour or two. There are literally hundreds of very distinct jobs within production, just like there are hundreds of jobs within the military. We have everything from Writers and Directors to Sound Techs and Medics. A lot of my veteran friends work in production management – Assistant Directors, Line Producers, and Unit Production Managers – but I also have friends who work in stunts or even as actors. Once you have an idea of where you’d like to focus your attention, take the necessary steps. For me, it was film school. For others, it’s an apprenticeship through one of the cinema guilds or unions. There are just as many ways to enter the business as there are jobs. Again, I would say to link up with someone doing the specific job you want, and ask them how they got there.

Are there any organizations that can help veterans transition into filmmaking?

Absolutely. A couple that come to mind right off the bat are Vets on Set, which has a job board that is only open to veterans, and Veterans in Film and Television, which is a group that hosts monthly meetings in Los Angeles and New York, where veterans meet up, network, pitch ideas, and hire each other for upcoming projects. The Directors Guild of America also has an apprenticeship program that anyone who served as an E5 or above can apply for with zero on-set experience. The apprenticeship is three years long and prepares candidates for work as a 2nd Assistant Director. 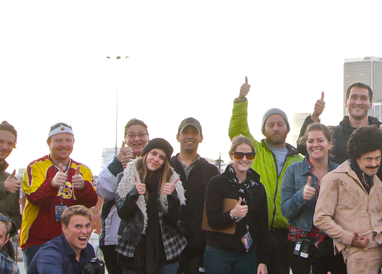 If you’re a veteran who would like more information on transitioning into the world of film and television production, you can click on one of the links below.

The biggest lessons I learned in the military definitely have to do with leadership, teamwork, and getting the job done no matter what obstacles you might face. Quitting isn’t an option when you’re deployed, so you just develop the innate ability to adapt to any situation, tweak your plans as needed, and accomplish the mission no matter what.

REP created a series of broadcast commercials for the VA geared to help connect and engage veterans with the services offered at their hospitals. Feel free to watch them below!